The Tour de France 2017 in Luxembourg: Where it passes and where to stay!

So, the Tour de France will be back in Luxembourg on July 3rd and July 4th. That’s right: BACK in Luxembourg. When the peloton passes through the Grand Duchy this summer, it will be the eighth time for our small country to be in the spotlight of the World’s most prestigious cycling race. When the Tour first arrived here in 1947, it was love at first sight!

“But why Luxembourg?” you may ask. Well, we don’t just love cycling, we’re also pretty good at it! Let’s stop for a second and look at a few numbers:

The third stage of this year’s Grande Boucle, held on July 3rd, will start off in the Belgian city of Verviers, from whereon it will head southwards through the Ardennes and cross into Luxembourgish territory in the North of the Grand Duchy. From there on the cyclists will continue to Troisvierges, Wincrange and Wiltz. And this is where it gets particularly interesting: Just a stone’s throw away from our picturesque youth hostel in Lultzhausen, between the villages of Esch-sur-Sûre and Eschdorf, lies one of the toughest – if not the toughest – climb of the stage. This could be one of the best places for spectators along the entire stage!

Around 20 km further south, the Tour will pass through Tuntange, situated just a few minutes away from our youth hostel in Hollenfels. The hilly terrain in the area would be perfect for a late attempt of a breakaway before going back to flatter terrain near our capital and youth hostel in Luxembourg City, which of course is also conveniently situated for any fans of the spectacle.

Near the end of this exciting stage, the cyclists will even ride straight past the front door of the brand new youth hostel in Esch-sur-Alzette currently still under construction. The cyclists then leave Luxembourg and finish the stage in a climb that leads up to the French border town of Longwy.

The fourth stage of the Tour, held on July 4th, is your ideal opportunity to witness a stage start: Leading from Mondorf-les-Bains, home of Luxembourg cycling legends Fränk and Andy Schleck, the cyclists will continue through Remerschen, almost past the front door of another one of our youth hostels. Heading South, the peleton will then exit our beautiful country in the town of Schengen, known for the international agreement that united Europe like no other. Arriving in France, the Tour continues southwards along the Moselle River, finishing in the town of Vittel in the Vosges department.

Don’t miss out on this excellent opportunity to witness the most exciting spectacle in cycling in 2017! 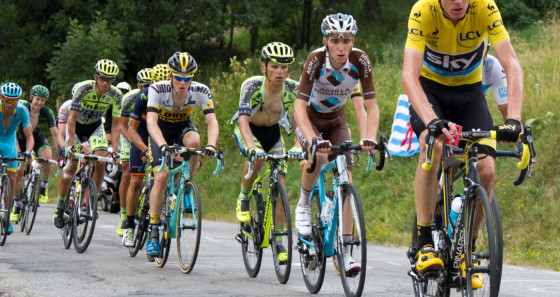 Chasing yellow: The most exciting cycling spectable in the World!