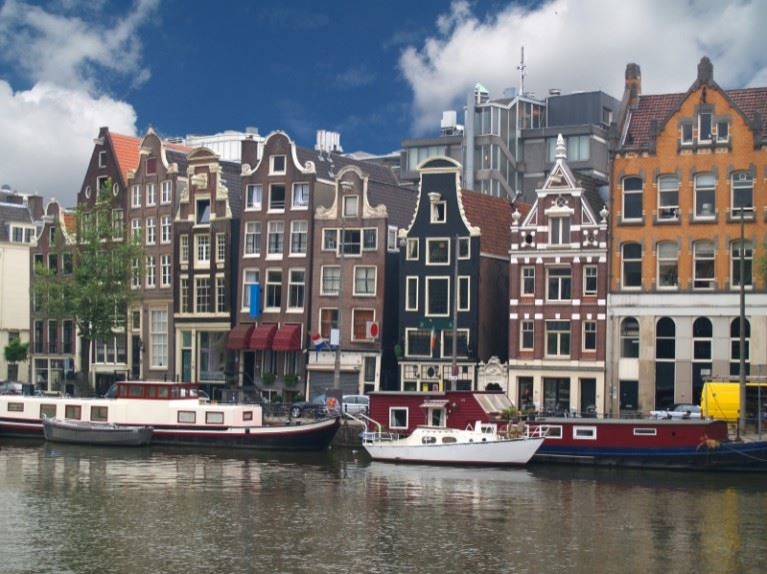 Amsterdam is the capital and largest city of the Netherlands, located in the province of North Holland in the west of the country. You will witness a different way of life compared to some other cities. Homes are made on boats moored in the canals and bicycles are used everywhere to get around. There is a lot to do in this easy-to-navigate city and there are many things to discover.

We recommend you stay at the Stayokay Amsterdam Vondelpark hostel, which is located in the city center near the Leidseplein area. This large hostel has 536 beds available in private and multi-shared rooms. You can also make use of the WIFI and internet services, laundry, bike shelter, pool table and TV room. Discounted tickets to attractions can be accessed, as well as electronic locks and safes. Sheets and breakfast are included in the price.

Things do to and see in Amsterdam

Dam Square lies in the historical center of the city. Dominating one side is the National Monument which is dedicated to all those who perished during the Second World War. Facing the square is the Palacio Real, which you can visit during the summer. At one end of the square Kalverstraat is situated; this is the main shopping street of the city.

Red Light District / De Wallen is a designated area for legalized prostitution and has become well-known as a tourist attraction. Workers will be on show behind a window or glass door, typically illuminated with red lights. The area is not highly recommended after midnight. The Sex Museum in this area (on Damrak 18) is open from 10.00am to 11.30pm – you’re not allowed if your under 17 years of age.
There is also a Hash Marihuana Hemp Museum located at Oudezijds Achterburgwal 148. During the summer it is open daily from 11.00am to 11.00pm, off season it’s only open Sunday to Wednesday until 6.00pm.
Some Amsterdam coffee shops serve not only food and drinks but also hashish, marijuana and space cakes. Most are located in the Red Light District area; you can also find cafes in the Jordaan neighborhood. This activity is perfectly legal and many visitors consider it to be one of the city’s leading attractions.

Begijnhof is one of the quietest areas of the city located behind walls and closed doors (almost always unlocked). Upon entering you'll be passing through an area built in the eighteenth century. This is one of many hofjes of Amsterdam, which were for poor people at the time they were built.

Koninginnedag (or Queen’s Day) is the national holiday in the Netherlands that is celebrated every year on 30th April unless it falls on a Sunday. Thousands of people take to the streets dressed in orange and they dance, draw, play music and have fun.

There are many outdoor markets in Amsterdam. The largest is Waterloo where you can find stalls selling new and used clothing, antiques, food, etc. The Bloemenmarkt is on the Singel canal and Muntplein; it is a floating flower market. Both markets take place on Mondays to Saturdays from 10.00am to 5.00pm.
From Amsterdam you can visit Alkmaar (meaning cheese market). This is a small city criss-crossed by canals. In the main square from May to September a famous cheese market takes place every Friday morning. You are invited to try many different cheeses and tastes from large platters. It is recommended to arrive early, around 9:30am. There are two trains per hour from the Central Station; the journey takes half an hour.

The Heineken Factory on Stadhouderskade 78 no longer produces beer, but guided tours, explaining the history of this factory, still take place. Tours end at the bar and your entrance ticket will get you a nice glass of beer or two. Tours are conducted from Monday to Friday and cost around 15 euros.

Anne Frank’s House is a piece of wartime history on Prinsengracht 263. Anne’s family, along with four others, spent two years hiding in the annex building. On August 4, 1944 the Gestapo came to the hiding place and sent the group to a concentration camp. Only Otto Frank, her father, survived. Upon his return to Amsterdam he found the diary Anne had written in the years of hiding; you can see the original in one of the last rooms. Open from Monday to Friday from 9.00am to 6.45pm, Sundays from 10.00am. From September to May the house closes at 5.00pm.

The Van Gogh Museum on Paulus Potterstraat 7 has the largest collection of works by this artist. It houses 200 paintings and nearly 600 drawings. It is open daily from 10.00am to 5.00pm. This museum is very close to the Stayokay Amsterdam Vondelpark youth hostel.

Rembrandt's House on Jodenbreestr. 4 is where the artist lived and worked until he was forced to move by large debts he had accumulated. The house displays some of his finest work. It is open Monday to Saturday from 10.00am to 5.00pm, and until 1.00pm on Sundays.

The Rijksmuseum has an extensive collection of art from the fifteenth century to the nineteenth century. Here you can view Rembrandt's Night Watch. It is open from Tuesday to Sunday. If you're going to visit from the hostel in Amsterdam, the Stayokay Amsterdam Vondelpark is very close.

Eating out and Nightlife in Amsterdam

The Rijsttafel (literally means rice table) is an Indonesian feast adopted by the Dutch and a typical dish in this city. The meal consists of a large central bowl of rice surrounded by up to twenty smaller bowls containing highly seasoned meats and vegetables. There is also a vast range of international restaurants in the city to suit every budget. The nightlife is diverse in this city with plenty of pubs, bars and restaurants to choose from.

Getting around in Amsterdam

The best way to get around this city is on foot or by bicycle. You'll see a lot of bicycle paths and there are special traffic signals for bikes to which pedestrians should pay attention.

The railway station is the terminal for all international and local services, located within a few meters from the city center. The information office is open daily from 6.30am to 10.00pm. The city also has trams, two metro lines, and buses running day and night. For buses and trams you can buy the ticket when boarding. There is also a transport fare system that operates nationwide and you can purchase a card for the entire country. For information, go to the GVB office in the central station, next to the VVV. Three trains per hour connect the airport Schiphol to the Central Station. The journey takes about 20 minutes.