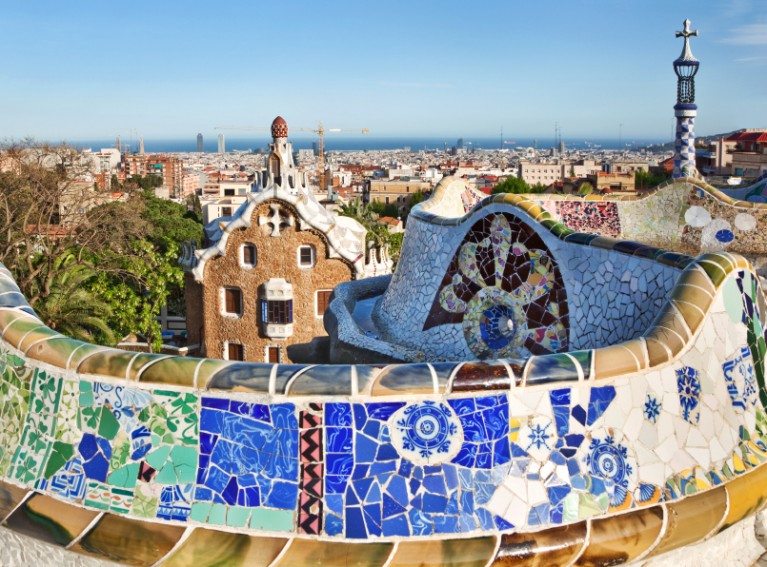 As you arrive in this city the architecture will strike you as being a fundamental part of its charm. Barcelona mixes the old and the new in a unique style. Gaudí has been a big influence; Picasso and Miró have also left their legacies. Nothing is missing from this city; you have the Mediterranean Sea and its beaches, the harbor and surrounding mountains.

We recommend you to stay in the 'Pere Tarrés' youth hostel located in the old town of Barcelona. It is 100m from Las Ramblas, the city’s famous tree-lined street and very close to Plaza Catalunya and the beach. This youth hostel has internet service, breakfast and sheets included in the price, as well as towel hire, cable TV and air conditioning. The library houses travel publications, free maps of Barcelona, games and information about the city.

Things to see and do in Barcelona

A visit to the Gothic Quarter is essential. Las Ramblas is a characteristic that links the Plaza Catalunya to the port, where the monument of Christopher Columbus stands. The "Església", Cathedral of the Holy Cross, is located in the Plaza de la Seu, open from 8.00am to 1:30pm and 4.00pm to 7.30pm.

Sant Jaume Square is surrounded by the Palau de la Generalitat, the Catalan government headquarters and City Hall. It is advisable to devote a few hours to cover this area, as each street has its own attractions. This area of the city can be a little dangerous at night, just try to avoid poorly lit streets and alleys.

The Work of Gaudí and his buildings are an integral part of Barcelona’s landscape. His creations revolutionized an era and continue to draw wonderment to these days. He died in 1926 without seeing his last completed work, La Sagrada Familia. You can visit from 9.00am to 7.00pm and the visit includes a small museum with maps, models and photos of different years that show the evolution of his work. From the Paseo de Gracia you can see Casa Batlló and also Casa Milà (better known as La Pedrera). Casa Milà was built between 1906 and 1910 and is currently used as private apartments / cultural center. Casa Batlló is a residential building with a striking facade that can only be seen from the street. It was built between 1904 and 1906. Park Güell is located in the northern part of the city from where you have a spectacular view across Barcelona. It is a perfect combination of nature and architecture, where Gaudí chose to live from 1906 until his death. Admission is free.

The Picasso Museum houses the largest collection of works by this artist in Spain. It has an estimated total of 3,000 works including drawings, paintings and ceramics, some of which were donated by the painter himself. The museum is open from Tuesday to Saturday from 10.00am to 8.00pm, and on Sundays until 3.00pm.

The 61 bus departs from Plaça d'Espanya and goes to Montjuic. Take the bus up to the Miró Foundation and then walk down. You can see where the Olympic Stadium was built for the 1932 Olympics; it was then renovated for the games in 1992. Admission is free and it can be visited from 10.00am to 8.00pm. There are examples of Miro's work from different periods on display at the Miró Foundation. This museum is not only dedicated to his work, but also modern art exhibitions of other artists. It is open from Tuesday to Saturday from 10.00am to 8.00pm, and on Sundays from 10.30am to 2.30pm.

Sitges is a very popular seaside resort in the summer months and several celebrations take place throughout the year on 23th and 25th August the Festa Major Carnival. Sitges is 40km from Barcelona. To get there you can take the train, one leaves every 15 minutes from Barcelona Sants. It is worth visiting in the day to tour the town and relax on its beaches; the sea is only a 10 minutes walk from the train station. It is a small city and easy to navigate on foot.

Getting around in Barcelona

Barcelona Sants central train station connects to the whole city through the underground network (M: Sants-Estació).
The best way to get around this city is on foot. If you do want to use the public transport system the subway service is very good and available from Monday to Thursday from 5.00am to 11.00pm, and Friday to Sunday from 6.00am to 12.00pm.

Catalan is the common language used in Barcelona. You'll find most of the names and references contained in that language.

During the summer months parties are held in Barcelona. This is when dances, concerts and other cultural activities will take place in the streets of every neighborhood.