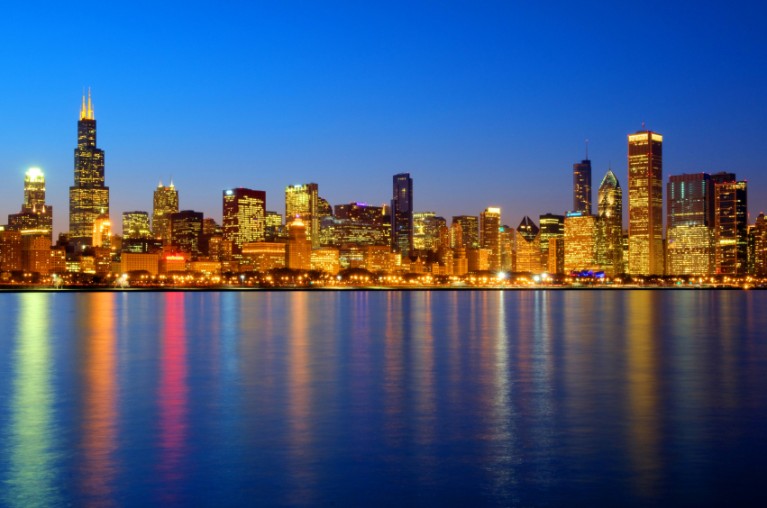 Chicago has been long associated with jazz and gangsters from the time when the notorious Al Capone and his gang took hold of the city in the 1920s. These days Chicago is proud to be a hotspot for business and is listed as one of the world's top ten global financial centers. This metropolis of skyscrapers combines art deco architecture and modernity producing a stunning skyline, plus fun, good food and a multi-cultural society.

In the heart of downtown is the HI-Chicago hostel which is near all the major tourist attractions – Lake Michigan, Millennium Park, Sears Tower, the Art Institute, Field Museum and Shedd Aquarium. It is a comfortable hostel with 500 beds which takes group bookings and where family rooms are available. Furthermore the place is suitable for wheelchairs. There is also a big self-service kitchen, internet, air condition, communal areas with games and TV, an elevator, laundry service and luggage room. Bed sheets and breakfast are included in the price.

Things to see and do in Chicago

In 1885, the first steel-framed high-rise building, the Home Insurance Building rose in Chicago ushering in the skyscraper era. Today, Chicago's skyline is among the worlds tallest and most dense. The nation's two tallest buildings are both located in Chicago; Willis Tower (formerly Sears Tower), and Trump International Hotel & Tower.

Eating out in Chicago

The city has many ethnic restaurant districts. Including the Mexican villages, such as Pilsen on 18th Street and La Villita on 26th Street; the Puerto Rican enclave Paseo Boricua in the Humboldt Park neighborhood; Greektown on South Halsted; Little Italy on Taylor Street, just west of Halsted; Chinatown on the near South Side; Polish fare reigns at Belmont-Central; Little Seoul on and around Lawrence Avenue; there is also a cluster of Vietnamese restaurants on Argyle Street and South Asian (Indian/Pakistani) on Devon Avenue.

Getting around in Chicago

Chicago is one of the largest hubs of passenger rail service of the nation. Many long distance services originate from Union Station and arrive in New York, Seattle, Portland, New Orleans, San Francisco, Los Angeles, San Antonio, and Washington. There are also short-haul services throughout Illinois and toward nearby Milwaukee, Indianapolis, St. Louis, and Detroit.

Don’t leave Chicago without tasting the nationally renowned deep-dish pizza. This style is said to have originated at Pizzeria Uno in Chicago’s River North Region.