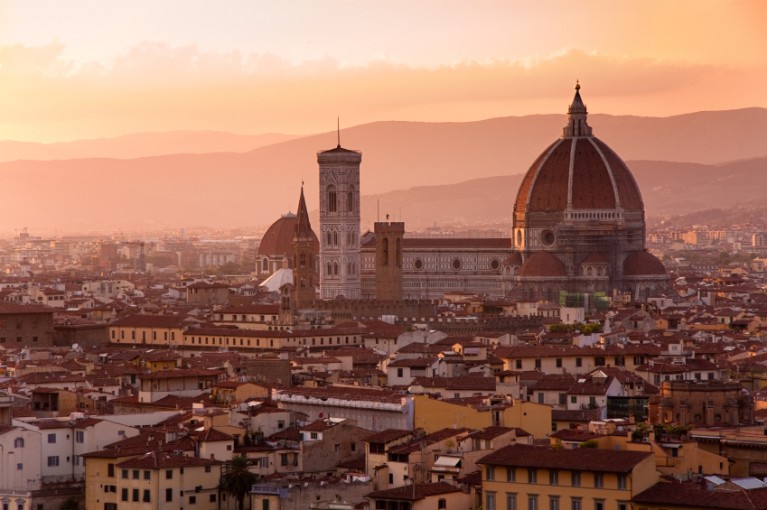 Florence is the capital city of the Italian region of Tuscany. It is considered as the birthplace of the Italian Renaissance and is incredibly beautiful. It was declared a World Heritage Site by UNESCO in 1982 and is one of the most desirable places to visit in the world. The city also makes a major European impact on music, architecture, education, cuisine, fashion, philosophy, science and religion. The historic center of Florence contains numerous elegant squares (piazzas), Renaissance palaces (palazzos), academies, parks, gardens, churches, monasteries, museums and art galleries.

We recommend you to stay at the Villa Camerata hostel which is 4km from downtown Florence. The hostel is an old country house built in the seventeenth century located in the middle of a park with large trees and a beautiful garden with rare botanic species; this is an excellent place to relax. There are beds in shared rooms, internet access, TV room, laundry service and meals. Sheets and breakfast are included in the price.

Things to see and do in Florence

The Cathedral of Santa Maria del Fiore is a few minutes’ walk from the train station. It was built in the year 1296 and took nearly two centuries to finish. The Brunelleschi's dome is an extraordinary example of his technical and mathematical genius. You can go up and see the whole city as it is the tallest building in Florence. Open from 9.00am to 6.00pm.

Opposite the cathedral stands the Baptistery, admired for its bronze doors, designed by Lorenzo Ghiberti. The doors on the east side were named by Michelangelo as the ‘Gates of Paradise’. You can enter the Baptistery from 1.00pm to 6.00pm.

Uffizi Gallery is one of the oldest and most famous art museums in the world and a vast legacy of the Medici family. It features works ranging from the thirteenth to the eighteenth century including the artists Giotto, Leonardo Da Vinci, Rembrandt, Goya and Raphael among others. The gallery is open from Tuesday to Saturday from 8.30am to 6.50pm, and Sunday from 8.30am to 01.50pm but is closed Mondays.

Palazzo della Signoria was built between 1299 and 1314 and was known as the headquarter of the Duchy of the Medici. It is open daily from 9.00am to 7.00pm, except on Thursdays, then it is closed. Up until a few years ago it overlooked the sculpture David by Michelangelo, which is now a copy. The original is on display in the Accademia Gallery (see below). The Loggia della Signoria, an outdoor sculpture gallery, is located in the right corner of the palace. Facing it is a huge fountain with a sculpture of Neptune.

Accademia Gallery features the sculpture David by Michelangelo. It is open from Tuesday to Sunday but closed on Mondays (please check opening times). It is advisable to go early morning.

Ponte Vecchio is one of the most recognized views of Florence. The bridge over the Arno River was the only one that withstood the blitz of World War II.
The Medici Chapels in the Basilica of San Lorenzo comprises two structures added to Brunelleschi's original design, each intended to celebrate the power of the Medici as Grand Dukes of Tuscany. One is the Sagrestia Nuov, designed by Michelangelo. The other is the Cappella dei Principi, the sixteenth and seventeenth century ‘Chapel of the Princes’.

Museo Nazionale lies between the Duomo and Piazza della Signoria, Palazzo Podesta (Bargello). It now has a large collection of sculptures, including Donatello's David. Open from Tuesday to Saturday from 9.00am to 2.00pm, Sunday until 1.00pm and closed on Monday.

After traveling all day museums and places, there is nothing better than to move towards the Piazza Michelangelo. The sunset from this point is spectacular; the view of the city is unbeatable. Just at that moment you’ll get an idea of the true dimension of the Duomo as it dominates the skyline.

Getting around in Florence

All trains arrive at Santa Maria Novella station, located near the tourist area. A bus service operates in the city. Tickets must be purchased before boarding and then will be validated on board. Most attractions are located in the center, making them accessible on foot.
Siena is located just one hour from Florence. In the Middle Ages the town was an independent republic which was to rival its neighbor. It is divided into 17 districts and elected each year an extraordinary horse race that takes place in the Piazza del Campo as part of a regional party. At the bottom of the square is the Palazzo Comunale, which is considered one of the most beautiful Gothic buildings in Italy. Open from March to November from 9.30am to 7.45pm, every Sunday and the rest of the year to 1.45pm.

You can visit Pisa and the Piazza del Duomo (more commonly known as Campo dei Miracoli), where the Cathedral and the Leaning Tower are located. Galileo was able to raise its 294 steps for experiments on gravity, but unfortunately today is not possible to access the interior of the tower. It is estimated that it still creeps 1 or 2 cm a year. After watching the Campo Dei Miracoli, you can take a stroll down Via Santa Maria and explore the old town.

If your stay will be short, take into account the opening hours of the attractions and that most are closed on Mondays so you don’t lose any of the delights offered by Florence and its surroundings.

Mëllerdall Outdoor! Training courses for the outdoor and adventure guide