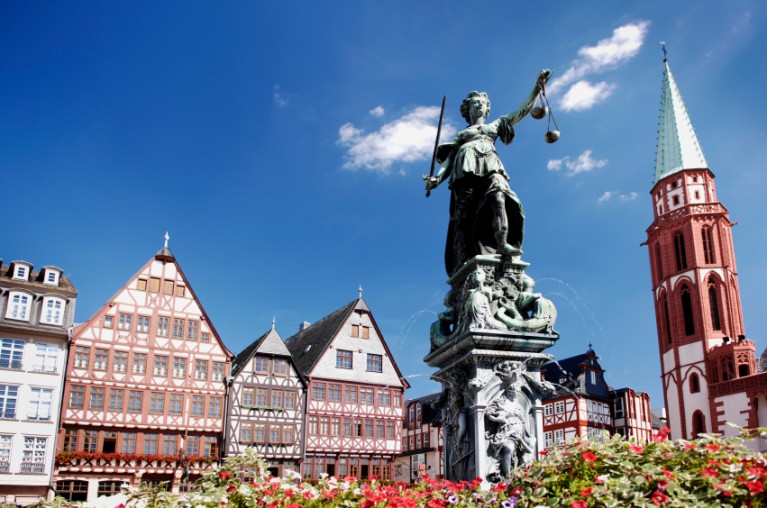 Frankfurt is the fifth-largest city and situated on the main river in Germany’s central belt. As the largest financial center in continental Europe, this city has major influence in matters of commerce, finance, culture, transport, education, and tourism. There are many museums, buildings and trade fairs which attract many visitors every year.

We recommend you to stay in Frankfurt's Haus der Jugend hostel located just 1km from the old city center. It's close to Frankfurt's opera house, museums, music clubs and restaurants. There is capacity for 436 guests and facilities include internet access, TV and meals.

Things to do and see in Frankfurt

Bartholomew's Cathedral (Dom Sankt Bartholomäus) is a Gothic building which was constructed in the 14th and 15th centuries. From 1356 onwards, kings of the Holy Roman Empire were elected in this church, and from 1562 to 1792, the roman-German emperors were crowned here.

The Old Opera House (Alte Oper) was built in 1880. Until the late 1970s it was nicknamed ‘Germany's Most Beautiful Ruin’. Due to public pressure, it was finally fully reconstructed and reopened in 1981. Today it functions as a concert hall, an inscription on the frieze of the Old Opera says: ‘Dem Wahren, Schönen, Guten’ (To the true, the beautiful, the good).

Museumsuferfest (Museums Riverbank Festival) is one of the biggest cultural festivals attracting more than 3 million visitors over a period of 3 days. It takes place yearly at the end of August on both sides of the Main riverbank. More than 20 museums located there are open far into the night. Furthermore there are special attractions like live-bands, dance shows, several booths for crafts, jewellery, clothes and food from all around the world. It ends with a spectacular firework display.

There is a vibrant mix of breweries-turned-clubs, funky DJ bars and lounges in derelict factories which makes a night out in Frankfurt slightly edgier than your average city centre experience. As the home of trance music techno-pumping venues and late-night cafés are easy to find. You can also dance the night away in the elegant upper-floors of the city's high-rise skyscrapers. There is a more relaxed pace in the taverns and beers gardens south of the river where apple wine is served in earthenware jugs. Most bars are open until 1am during the week, and into the early hours on weekends.

Getting around in Frankfurt

The city also has two underground railway systems: the U-Bahn and the S-Bahn, as well as an above ground trams which run every 10 minutes.
A number of bus lines complete the Frankfurt public transportation system. Night buses take over the service of the U-Bahn and trams between 1:30 and 3:30am.

Taxis can be found outside most S-Bahn or U-Bahn stations and major intersections. Velotaxis have also become popular. There is a tricycle ridden by the ‘driver’ with a sheltered passenger cab. There is room for two people and the service covers the entire city.

Deutsche Bahn rents out bicycles at major road intersections and railway stations. They can be hired per day for 15€. Frankfurt has a network of modern cycle routes throughout city, so it’s an excellent way to get around.

In the summer, many venues set up outdoor beach clubs, complete with sand, barbecues and volleyball tournaments. This is a really fun way to spend time in the city!