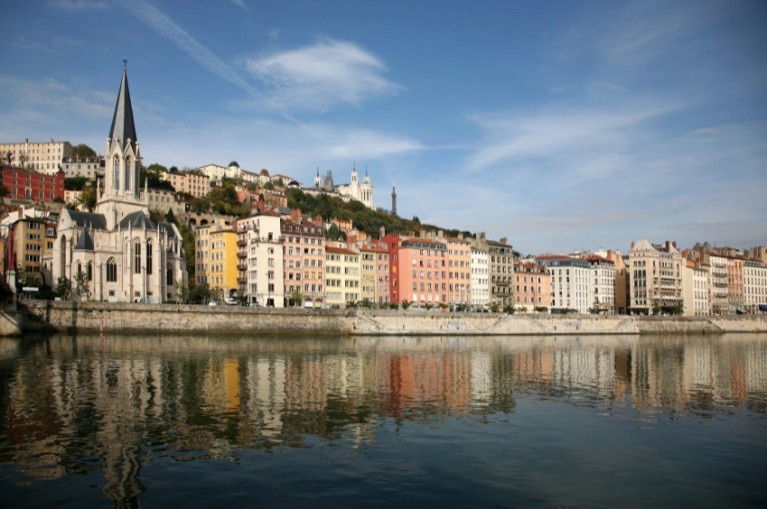 Lyon is known for its historical and architectural landmarks and is a UNESCO World Heritage Site. As the culinary capital of France this is also the place to try the best food this country has to offer.

The Lyon hostel is set close to the Renaissance district, between the St. Jean Cathedral and the Gallo Roman Museum. There is capacity for 180 guests and facilities include kitchen, laundry and TV.

Things to do and see in Lyon

The Basilica of Notre-Dame de Fourvière was built as a mark of the triumph of Christian values over the socialists of the Lyon commune of 1870. Its design draws from both Romanesque and Byzantine architecture featuring fine mosaics, superb stained glass and a crypt of Saint Joseph. The basilica offers guided tours and contains a Museum of Sacred Art.

The Lumière brothers pioneered cinema in the town in 1895. The Musée Lumière is a fascinating piece of architecture and holds many of their first inventions including other early cinematic and photographic artefacts.

Eating out and Nightlife in Lyon

Lyon is famous for its morning snacks formerly had by its (silk) workers. ‘Mâchons’ are made up of local meats or sausage and usually accompanied by Beaujolais red wine. You can also try the salad traditional to the area called ‘Salade Lyonnaise’ which is lettuce with bacon, croutons and a poached egg.

The city's architectural heritage is best viewed at night, when over 100 sites are illuminated. It’s lovely just to walk around and experience the atmosphere. Old Lyon, the banks of the Saône, the Presqu'île and Croix Rousse are the liveliest districts at night. There is a wide variety of themed bars and pubs including Irish, English, Latino and Cuban.

Getting around in Lyon

The Saint-Exupéry International Airport is located 20km (12 miles) east of Lyon, and serves as a base for domestic and international flights.
Lyon is connected by the high-speed train (TGV) and has two major railway stations: Lyon Part-Dieu and Lyon Perrache. The city is served by Eurolines coaches; the terminal is located at the Perrache railway station. Perrache is also the travel hub for trams, local and regional buses, metro line A, the bicycle service Vélo'v, and taxis.