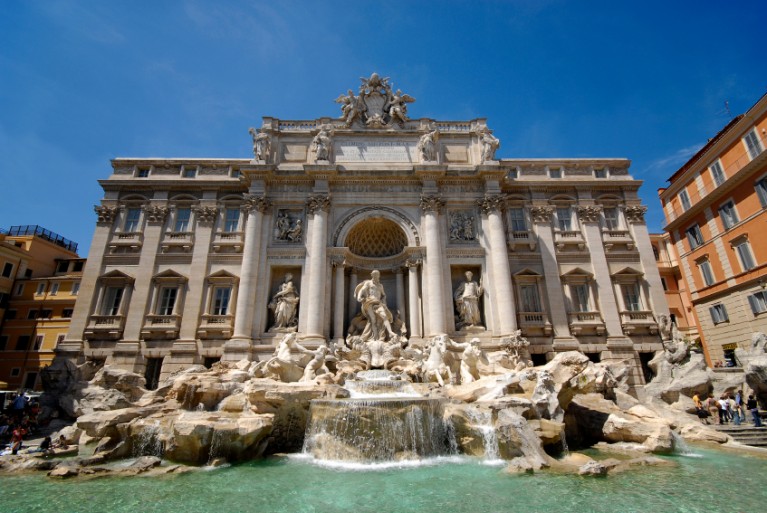 Rome's influence on western civilisation has been immense and as the capital city of Italy it is still respected for its historical power and influence. Rome has even been nicknamed The Eternal City and Caput Mundi, which is Latin for ‘Capital of the World’.

Our recommended hostel in Rome is the Roma Downtown Hostel located in the center and just a half hour walk from the main places of interest like the Roman Forum and the Colosseum. The hostel has beds in shared rooms and offers internet access, TV room, air-conditioning and laundry service. Breakfast is included in the price.

Things to do and see in Rome

The Colosseum once held an audience of 50,000. This elliptical amphitheater is the largest ever built in the Roman Empire and was used for gladiatorial contests and public spectacles such as animal hunts, executions, re-enactments of famous battles and dramas based on classical mythology. You can visit the ruins in summer on Mondays, Tuesdays and Thursday to Saturday from 9.00am to 7.00pm, Wednesdays and Sundays from 9.00am to 2.00pm, in the winter it's open daily at 9.00am and closes one hour before sunset.

The Baths of Caracalla are located in an area of 10 hectares and back in the day would accommodate up to 1600 people. The Caracalla was a complex of buildings (more like a leisure center), they even had two libraries; one for Greek language texts and one for Latin language texts. From the Colosseum it’s a 15 minutes walk (or take the 118 bus). Open in summer on Mondays from 9.00am to 2.00pm and Tuesday through Saturday from 9.00am to 7.00pm, the rest of the year from 9.00am until one hour before sunset.

The Pantheon, located in Piazza della Rotonda, is the only building of ancient Rome that is in place and complete. This is a temple dedicated to Venus and Mars with only one source of light coming from an opening in its impressive dome. Open from June to August, Monday to Saturday from 9.00am to 6.00pm, from October to May, Monday to Friday from 9.00am to 4.00pm. On Sundays throughout the year is open from 9.00am to 1.00pm.

Piazza Navona is a few meters from the Pantheon and is one of the most beautiful squares of Rome. The work of Gian Lorenzo Bernini's Fountain of Four Rivers dominates the view from the center. Four huge white marble statues personify the world's most important rivers: the Ganges, Nile, Danube and the Rio de la Plata.

The Vatican. St. Peter's Basilica is the most famous church in Christendom. Inside you will find many works of art. One of the most admired is the Pieta of Michelangelo, which he carved when he was only 25 years and is now protected by glass. Open from 7.00am to 6.00pm. There are strict rules for entry no shorts or low-cut shirts can be worn.

Vatican Museums contain a number of works of art that various popes have collected. The Raphael rooms (which were the private rooms of Pope Julius II in the 16th century) are an extensive gallery of maps and collections of ancient Greek and Roman works; Michelangelo's Frescoes cover the ceiling of the Sistine Chapel. In the wall of the altar you can see the Last Judgement. Open Monday to Friday from 8.45am to 1.45pm (summer until 4.45pm.) Year-round on Saturdays from 8.45am to 1.45pm. The museums are closed on Sundays and are only open on the last of each month when your visit will be free.

Piazza di Spagna, better known as the Spanish Stairway, sometimes play host to small flower markets. During May, parts of the steps are covered by pots of azaleas and come Christmas time a nineteenth century crib is displayed on the first landing of the staircase. This is not a place for eating lunch, which is forbidden by Roman urban regulations, but they are usually crowded with people.

Fontana di Trevi was built by Nicola Salvi in 1732 and dedicated to Neptune. A popular custom is to throw a coin over your shoulder with your back to the fountain, this will ensure your return to Rome.

From Rome you can visit the ruins of Pompeii, or tour the island of Capri with the Amalfi Coast. Only you have to take into account when organizing the schedule, how much time available in the destination you choose. Other options nearby are: the cities of Perugia and Assisi.

Eating out and Nightlife in Rome

The best thing to remember is that you will pay a premium to eat in some of the tourist hotspots such as the piazzas and Pantheon, but generally if you venture further off the beaten track, restaurants will become more reasonably priced. Don’t be surprised if you end up sitting just inches away from diners you don’t know as this is very usual of the city.

By night most of the monuments are lit creating stunning and picturesque views of the city. Rome has a thriving nightlife where travelers mix with the Romans sitting on the edge of the fountains and bars that surround them.

Getting around in Rome

Most trains arrive and depart from Termini station. There are regular connections to all parts of Italy and European cities. ATAC bus line and most buses have their terminal stop in Piazza Cinquecento, in front of Termini station. Tickets must be validated on a machine once you’re on the bus.

There are two subway lines, Metro: A and B. Both go through Termini. People can take Line A to head to Piazza Spagna and the Vatican or Line B to the Colosseum and the Circus Maximus.

In Rome there are many pedestrian areas and it is advisable to walk during peak times, when public transport is busy.

The international airport, Leonardo Da Vinci, is located in Fiumicino. You can access the city via a direct train terminal (Termini) at the airport arrivals hall, with departures every day from 7.00pm until 10.50pm. The other airport is Ciampino, used for domestic flights and charters.

Care must be taken in some areas (in the queue to enter the Colosseum and close to the Trevi Fountain) to avoid pickpockets. It is common approach cover up a robbery with a newspaper. You should also not travel alone at night near the Termini station.