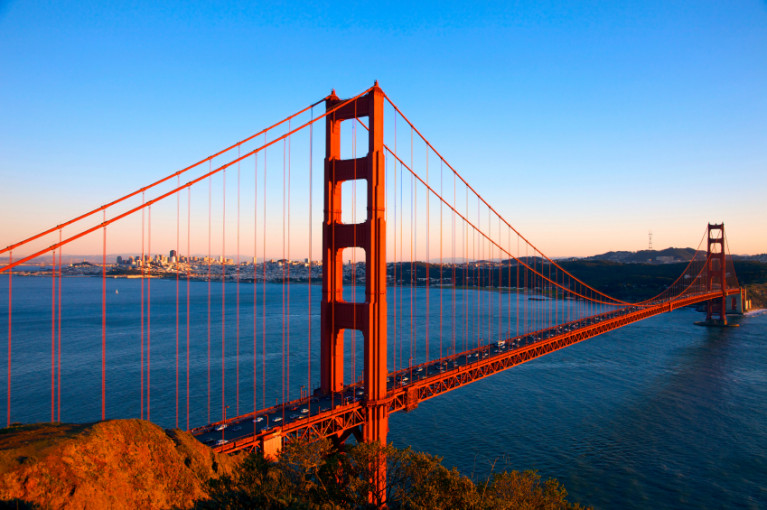 San Francisco is a city famous for the Golden Gate Bridge, cable cars and Chinatown. The California Gold Rush of 1848 propelled the city into a period of rapid growth and today ‘San Fran’ is a popular international tourist destination with people flocking to visit Alcatraz, Conservatory of Flowers and to experience the eclectic mix of historic, Victorian and modern architecture.

The hostel we would recommend is the HI San Fancisco Downtown hostel, which is located in a tourist district with restaurants, bars, theaters, museums, shops and Chinatown. The hostel has the structure of a hotel which has been renovated with private and shared rooms with four beds. It also offers family rooms and is great for groups. Bedsheets, taxes and breakfast are included in the price; there is also a kitchen, internet, TV and common rooms, laundry, luggage store and travel agency.

Things to do and see in San Francisco

The Golden Gate Bridge is a suspension bridge spanning the ‘Golden Gate’, the opening of the San Francisco Bay into the Pacific Ocean. It has been declared one of the modern Wonders of the World by the American Society of Civil Engineers. The Frommers travel guide considers the Golden Gate Bridge as possibly the most beautiful – and certainly the most photographed – bridge in the world.

Alcatraz Island is located in the San Francisco Bay, 1.5 miles offshore and often referred to as The Rock. The small island is best known for housing a federal prison which held famous inmates such as Al Capone, Robert Franklin Stroud (the Birdman of Alcatraz) and George "Machine Gun" Kelly. Today this historic landmark is open to tours. Visitors can reach the island by ferry ride from Pier 33 near Fisherman's Wharf in San Francisco.

Eating out in San Francisco

San Francisco is renowned as the restaurant capital of the USA, serving the best food in the world from fresh, local ingredients. There are two cuisines that tend to dominate in this city: try Asian in the Chinatown district and Mexican in the Mission neighborhood.

Getting around in San Francisco

The city-owned Municipal Railway (Muni) operates both a combined light rail and subway system (the Muni Metro) and a bus network. The iconic streetcars run on surface streets in outlying neighborhoods but underground in the downtown area. The Transbay Terminal serves as the terminus for long-range bus service (such as Greyhound) and as a hub for regional bus systems. A small fleet of commuter and tourist ferries operate from the Ferry Building and Pier 39 to points in Marin County, Oakland, and north to Vallejo in Solano Count. San Francisco International Airport is located 13 miles south of the city in San Mateo County.